Although the Guna have lived in eastern Panama for at least two centuries, scholars fiercely debate their origins. Language similarities with people who once lived several hundred kilometers to the west would indicate that the Guna migrated eastward. However, oral tradition has it that the Guna migrated to San Blas from Colombia after the 16th century, following a series of devastating encounters with other tribes armed with poison-dart blowguns. Regardless of the Guna’s origins, scholars agree that life on the islands is relatively new for them. Historians at the end of the 18th century wrote that the only people who used the San Blas islands at that time were pirates, Spaniards and the odd explorer. However, the Guna flourished on the archipelago due to the abundance of seafood. They supplemented this with food crops, including rice, yams, yucca, bananas and pineapples, grown on the nearby mainland. Today, there are an estimated 50,000 Guna; almost 32,000 live on the district’s islands, 8000 live on tribal land along the coast and many live outside the district. So communal are the island dwelling Guna that they inhabit only 49 of the nearly 400 keys; the rest are mostly left to coconut trees, sea turtles and iguanas.     San Blas Panama San Blas islands Panama San Blas Panama San Blas tours panama

The traditional Guna belief structure is based on three principal concepts: God, nature and the cosmos. According to the Guna religion, the world was created by God, Paba Tummat, and the Great Mother, Nan Tummat, who continue to keep watch over everyone’s daily actions. Although Guna shamans often look into the future and make minor divinations, everything in life is believed to be preordained by God and the Great Mother. In fact, the Guna make great efforts in their daily lives to ensure that their actions follow the will of Paba and Nan Tummat, even though they do not know their fate. The Guna identify strongly with nature, and their rich oral traditions are full of songs, hymns and prayers that recount the beauty and majesty of the wind, the land and the sea. To the Guna, people and nature are considered parts of the same entity and thus the rules of nature follow human life from birth to death. The Guna love and admire na- ture, and they believe that true happiness is only experienced within its presence. Guna cosmology is based on the doctrine that the knowledge of a concept allows the knower to manipulate the power of the concept. As a result, Guna myths and legends have both a literal and a symbolic meaning. For example, the story of the Ibeorkun, who descended to Earth to teach the Guna how to have chiefs, is often associated with most of the moral and ethical teachings of the Guna.

Not surprisingly, the cornerstone of the Guna political organization is the Ibeorkun (community gathering house). Here, men gather nightly for heated discussions about local events, to make decisions about important problems and to listen to the advice of chiefs. Generally, each island has at least three chiefs and their authority is officially recognized by the Panamanian government. Every year, there are two general assemblies for the representatives from all of the islands in the Comarca at which major issues affecting the Guna are discussed. Historically the Guna were matrilocal, meaning that when a man marries, he moves into the household of his wife’s parents and comes under the control of his father-in-law. Today, this pattern is yielding to neolocality, in that newlyweds will establish a residence away from both parents. As recently as a generation ago, Guna households had an average size of seven to 12 people, but today households often comprise as few as five people. The distinctive dress of the Guna is immediately recognizable no matter where you are in Panama. Most Guna women continue to dress as their ancestors did. Older women may be adorned with a black line painted from the forehead to the tip of the nose, with a gold ring worn through the septum. Colorful fabric is wrapped around the waist as a skirt, topped by a short-sleeved blouse covered in brilliantly colored molas. The women wrap their legs, from ankle to knee, in long strands of tiny beads, forming colorful geometric patterns. A printed headscarf and many necklaces, rings and bracelets complete the wardrobe. In sharp contrast to the elaborate women’s wear, Guna men have adopted Western dress, such as shorts and sleeveless shirts. In recent years, Guna culture has come under growing threat of Westernization, particularly as young Guna are drawn to Panama City in search of employment and increased opportunities. However, Guna culture has survived countless generations of foreign encroachment, and communities are just as committed to preserving their identity today 229 as they were when the Spanish first arrived. 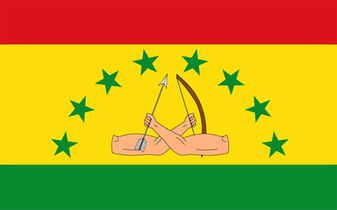 Until the late 1990s, the district’s principal currency was the coconut. (In recent years, the sale of molas replaced the sale of co- conuts as the Guna’s number one revenue source.) The Guna are coconut barons: a good year’s harvest reaches more than 30 million. Coconuts are bartered to Colombians, whose old wooden schooners can hold 50,000 to 80,000 coconuts. In return, the Colombians provide clothing, jars of coffee, vinegar, rice, sunglasses, canned milk, batteries, soups and other goods. In Colombia the coconuts are exported or used in the production of candy, gelatin capsules, cookies, shampoos and other products. Colombia has many processing plants for coconuts, but Panama, oddly, has none. Shrewd business people, the Guna regulate the price of coconuts on a yearly basis to prevent buyers from bargaining down individual sellers. Every year, Guna chiefs agree on one price for coconuts. A Guna found selling coconuts below or above price is severely punished by the community. By stabilizing the sale of coconuts and enforcing trade restrictions, the chiefs prevent price wars among the Guna. In another protectionist move, Guna law prohibits outsiders from owning property in the district. A conscious move to ensure limitations on tourism in the region, the law also prevents foreigners from speculating in real estate and driving up living costs. Today, lodgings are 100% owned and managed by local Guna families and are fairly uniform in offerings and quality.

When visiting the Comarca de Guna Yala, consider how your visit may affect the community. Tourism revenue can play a vital role in the development of the region, particularly if you are buying locally produced crafts or contracting the services of a Guna guide. However, Western interests have already caused irreversible damage to the region. Be aware of your surroundings and remain sensitive about your impact. One look at the paradisiacal setting, the rainbow flag and the distinctive Guna dress and you might feel transported into the pages of National Geographic. Don’t snap that shutter just yet, though. If the Guna appear unfriendly, consider their predicament. When cruise ships visit, the number of people on an already congested island can triple. Then, nearly two thirds of the populace (the tourists) turn paparazzi on the other third (the Guna). It’s an unsavory scene repeated again and again. To rein in the situation, the Guna charge fees for photographs taken of them as well as visitation fees for each island. If you can’t afford the photo fee, tuck away your camera and strike up a conversation instead. Remain mindful of the way you dress. Guna men never go shirtless and Guna women dress conservatively, with their cleavage, their belly and most of their legs covered. Arriving in Guna villages in a bikini or shirtless is interpreted as a sign of disrespect. Trash is a problem on the islands, and there is no effective plan for its management. For the Guna, the cost of removal to the mainland is too high, and there is no designated site or ‘culture’ of waste management, since all refuse was relatively innocuous until outside influence prevailed. You may see litter and burning piles of plastics (We recommend tourist to pick their garbage up and bring it to Panama City). With no current solution to the issue, do what you can to pack out your own garbage, if necessary, and try to consume fresh products with minimal packaging – ie choose coconut water over cola.